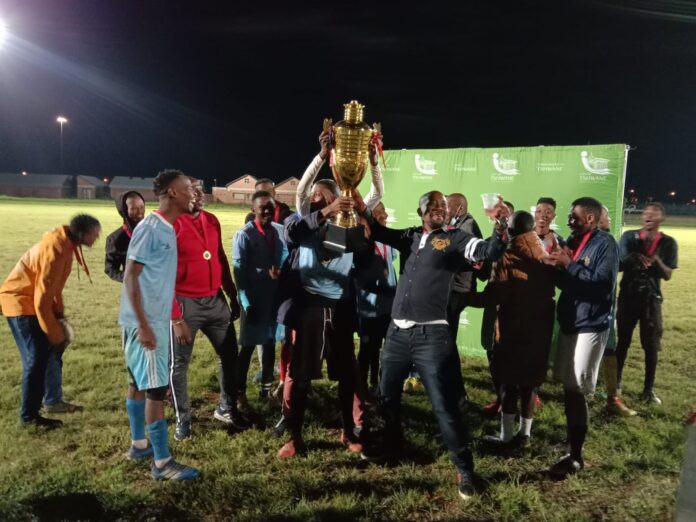 The BS MILAN Soccer Club from Temba won the Champion of Champions 2021soccer tournament at Mandela Stadium in Hammanskraal. This was at the 4th installment of the tournament that took place from 3rd till 18th December 2021.

The battle was between 16 teams from Hammankraal, Mpumalanga, and Pretoria that won other tournaments during 2021 to qualify for the Champion of Champions Tournament,  which is a winner takes all tournament.

“The championship took place during the night where we have two games, one from 6 pm and another at 8 pm,” said Coach Shadrack Mlambo, of the Hammanskraal Superstars Soccer
Academy.

He said the winners, BS MILAN, won R30 000, gold medals, a trophy and a soccer kit after defeating Kamas FC from Kanana 3-1.

All BS MILAN goals were scored by Surprise Matjeni who was awarded a Match ball for his heroic performance.

Coach Mlambo, who was also the event coordinator, thanked everyone who made the event possible under the difficult situation.

“The event went well as planned we did not see any bad behavior from teams and supporters.

“We really appreciate the growth we see in our community and as friends of Sports Organisation, we thank Mr Shakwane and Mr Mohotsi, the Champion of Champions Directors for making the event possible for the 4th year running,” he said.

Champion of Champions
1 of 7